When creating new SKUs and Purchase Orders, you can automatically assign them names according to a preset naming pattern.

Next to the Create New Sku button there is a smaller button which will open the naming pattern window.

The example is showing the location of the button on the SKU window, but the location is nearly the same for the Purchase Order window.

The bottom of the screen lists special characters that you can combine to create your own naming pattern, as per the examples in the window. Once you have entered a pattern into the first field (or selected from among your previously saved patterns), press Save button to save it. You can then use the Set As Default button to make that your default pattern which will be used any time the system auto creates a new name. Press the Set Initial# to see the initial value that the pattern should start with. You can save multiple patterns but only one can be set as default. 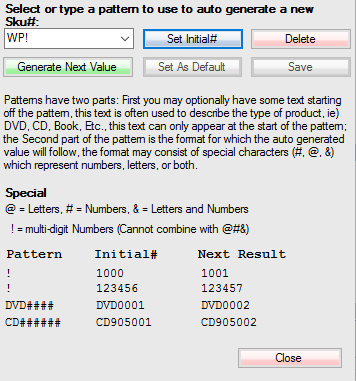 Was this article helpful?

Not the solution you were looking for?

Search or ask a question in
Community Forum